^_^ I forget how many gaming den’s are in town.

Today I managed to find the starting deck of the sword art online and I was baffled at how confusing the rules were (you would think it would just be a simple card game).
If you’re playing this place that there, some guy played that so now you have to play level 2 cards, he’s played this meaning the rules say…..STOP! I need time to think.
I bet it’s much easier then rules make it sound.

I have been starting to deeply think about how emotions are displayed in programs primarily aimed at children. This is not the time or the place to be going into a deep discussion about this however, i will leave you with this question:

What was the last show you watched that said crying was ok/ anger is natural/ sometimes you have to tolerate people around you?

There is not always an answer to every problem (i just want to see self righteous characters fail).

^_^* I had to rewatch the episode in order to jog my memory.*

This episode consisted of fighting, girls and BOOOOOOOOOBS!
This has to be the most fan-service ridden episode that sao has to offer.

Hallelujah are characters found the plot.   *I’ll go get the champagne.*

We finally get some screen time with Asuna (trying to break free).  My only problem with her scenes are that they are very sexualized, not in the senses of her being sexy but in the sense of the writers wanting her to be questionable saturation.  *you can’t look at the scene with the slugs and not say tentacle abuse.*

Back to Kirito and Suguha

Suguha has finally realized that kirito’s heart belongs to Asuna…. TOOK YOU TOO LONG!

Guess I should be thankful that the incest subplot is finally gone. 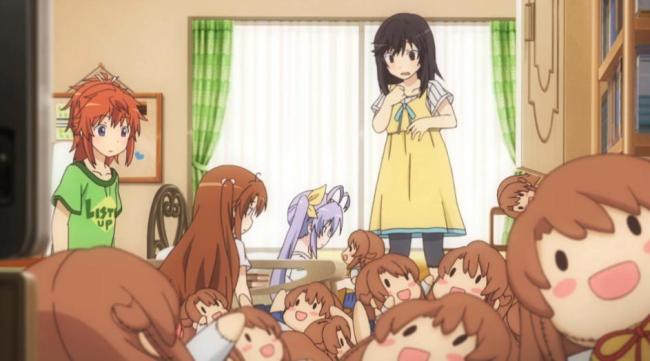 This series is just so hart warming, it embodies what the standard slice of life anime should be achieving.   Sure each of the characters has their mad moments but, there understandably mad (the kind of mad all teenagers do).

This anime’s humour is pretty much hit or miss.  Like most slice of life anime’s it has moments that completely stop the flow of the show just to have one joke (the best kind of jokes are the ones that feel natural).   *most of the jokes work.*

I find there are moments when the characters don’t really blend well with background, this could of been easily avoided if the characters had a little more shadow in wider scene (It’s a lot more noticeable from a distance).

I have one little complaint about this show, whenever there is a scene near the wood the cicada seem to overpower anything in a 2 mile radius.  I can understand that it’s cool to have the sound  of cicada coming from different speakers however, I watch anime for the characters not the ambience.

I just watched 5 episodes in a row of Non non biyori however, it’s now getting too late to do an impression.

I decided to choose  today to get all of my Christmas shopping done; before i knew it they were also all wrapped.

I’m glad that is out of the way but, I now have an aching back (I did not exactly feel well to begin with).

*My bedroom looks like the back of santa’s grotto*

Everything should be back to normal Thursday.

sorry guys,  i only have 30 minutes to write this post.

Looks like I will be completing sword art online soon (I want to read the novel).

*April is a long way away*

This blog will be back to normal on Wednesday.

This anime did not take long to establish who are main character is, what they are destined to do and the sprit that lives at the shrine.  I have to congratulate the writers (so many anime’s fail at this most basic of tasks).

The animation seems to vary, some moments the animation flows smoothly and then there are times the animation just seems to give up. e.g. They attempt to do a quick close-up of Gintaro however, they just randomly stop and jump cut to him (it looks very choppy).

I’m thankful that this show has at least attempted to explain what a Shinto shrine is, they could of easily presumed that the audience would already know what a shrine/what they were used for.

It’s not the best of anime’s but, it’s not the worse show that anime (in general) has to offer. 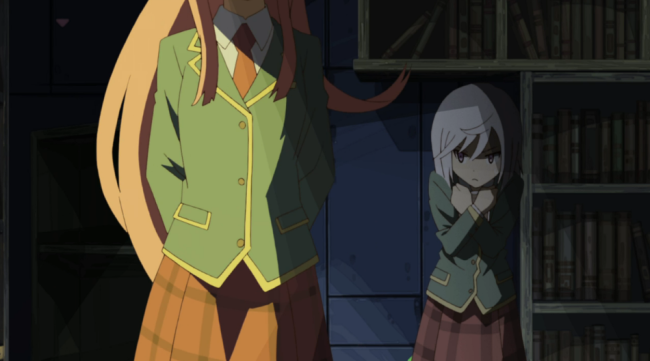 I’m really going to miss them creepy fairies and the show bazar way this show presents its arks.
*you get used to it……eventually.*
This anime is not an average insane  comedy, nor is it packet with romance; it’s just a anime that shows what would happen if randomness could make our lives much more fun.

It gets most of its humour by playing over the top insanity completely strait. It has been so long since I have seen comedy anime that does not revolve around quick gags that don’t even hit the mark half of the time (being aware of your bad gags does not make it funny).

The odd thing about this anime is that you will find yourself wanting to watch more episode just to see what these fairy are capable of and will are protagonist learn to keep them under control.

All I can say is:

Bring on the candy, bring on the fun, let there be fairies all day long

First things first…. SENTIENT STEAM! I do not care about what they are capable of in the game world, you can’t just move steam in order to cover someone in the bathroom (cutting away would of made a lot  more sense than just moving steam to cover her bottom).

Oh, did any one catch kirito doing the pelvic thrust?

Just like the last episode nothing really happens to kirito and Suguha (just more undertones of insest).

Why does Suguha have I huge poster of her avatar over her bed?

*it’s very vain when you think about it.*

We got to see more of Asuna in a very uncomfortable scene with butterfly-man (let me guess, this show is never going to address what he is doing to her?).

O-0 what  happen in this episode?

Kirito is rich, he can transform and……er…. Oh yeh, Suguha’s friend was captured.

Can Suguha stop drooling over her brother/cousin and realize that this Shinchi is interested in her.

Another episode where nothing happened (The undertones are bad however, part from that this anime is just boring).

*I knew what happens to Asuna before watching the anime*

Thanks poster, we now know what year this anime takes place.

The first thing I realized about this anime was that it’s a season 2 (why dose crunchyroll always get season 2‘s when they don’t have the first season) and secondly I realize that this anime was base on a visual novel.

The only reason I realized this  was because they were using background music as if that was the characters them song.    *This overly cheery music sure fits this scene (carrying stuff up the stairs). *

This anime has very light animation/ designs that complement the sweet story that I believe is going to develop in latter episodes.  I didn’t think that I was going to be that interested in this anime yet, it has captured my eye thanks to its natural characters and slow pacing.

6 episodes in and we still have very little character development. *I know nothing. ^_^*

You think they would be developing Hozuki character seeing as she is presumably the  protagonist, but alas she gets just as much personality/development as her sisters.

The only character that seems to have a morsel of individuality has to be Kazuki (it’s mostly her snobbery/unwilling to accept her sisters help).

Part from that, none of the girls have anything that makes them standout from each other (I’m constantly confusing the two older girls.)

Recently the show has tried to go for a drama approach ….yeh, show we need to have a little chat about drama.  In order for your audience to feel the full impact of a dramatic moment you  have to make us attached to your characters, without this we are emotional disattached from the situation (In other words, we will not care.)

I know more about the bad guys/ background characters then are actual leads.